Yarelis Barrios Castañeda. Glory of the Cuban sport, discobola. Champion of the Central American and Caribbean Games of Cartagena de Indias 2006 and of the Pan American Games of 2007, world multi medalist and runner-up of the Olympic Games of Beijing 2008.

Born on July 12, 1983 in Pinar del Río. Since she was a child, she practiced sports, she preferred basketball but decided on athletics. She started in the EIDE Ormani Arenado of Pinar del Río, in the Throwing of the bullet and Throwing of the javelin. At the age of 13, she was discovered by a Discus Sports Coach who saw the potential for this sport. The first coach was Orlando Torres Mendez.

At the end of the school category despite the good results was not captured for the National ESPA, the Santiago coach Hilda Ramirez, ¨La Bambina¨, discovered and began to work with her at the base in Santiago de Cuba, exceeding the mark of 50 meters was transferred to the National ESPA Giraldo Cordova Cardin.

In 2012, for the revolutionary attitude and remarkable merits achieved, the Young Communist League awarded her the Abel Santamaría medal.

She never won the national junior title in this specialty. In 2004 he was part of the national team. She stands out as a silver medalist in the XX Central American and Caribbean Games, and in 2007 she won the gold medal in the Pan American Games in Rio de Janeiro against the champion of that time, Yania Ferrales, by one centimeter. Weeks before, she had won the World University Games in Bangkok, Thailand, and became a bronze medalist at the World Championship in Osaka, Japan, a medal that improved to silver when the athlete who had occupied second place was disqualified for doping.

In 2008, she participated in the Beijing 2008 Olympic Games and won the silver medal, being defeated by the North American Stephanie Trafton.

In the 2011 Daegu World Athletics Championships, Barrios relied on her third throw, 65.73 meters, to get a meritorious third place that keeps her among the world's main competitors in her specialty. Approximately one month later, in September, she won the Diamond League with 14 points, finishing second in Brussels in the Ivo Van Damme Memorial with a 65 meters and 33 centimeters. In that same 2011 she was chosen as sportsman of the year in Cuba for her sports results. 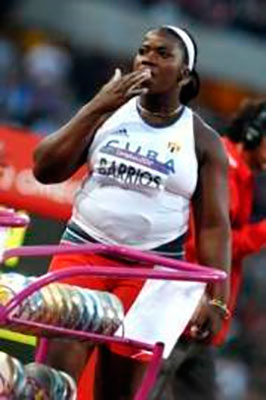 In the London 2012 Olympic Games, she finished fourth with a record of 66.38 meters, which was her second best of that season. In September 2012, she competed in the Berlin Athletics Grand Prix in Germany and won the gold medal with a 66.59m throw, which was her best performance of the season.

She was chosen again on December 10, 2012 by the survey carried out jointly by the National Institute of Sports, Physical Education and Recreation and the Circle of Sports Chroniclers of the Union of Journalists of Cuba among the most outstanding athletes of the year.

She began 2013 declaring that he would not retire from active sport and would train for the World Athletics Championships in Moscow. On March 16 of that year, with a shot of 65.17, she won the silver medal in the Cuba Athletics Cup at the Pan American Stadium in Havana, being surpassed by the Santiago Yaimé Pérez.

On June 6, she won the silver medal in the Roman stop of the Diamond League, held in Rome's Olympic Stadium with a 64.41-meter throw. In the competition Yarelis was surpassed in the competition by the Olympic champion, the Croatian Sandra Perkovic who sent the implement up to 68.25 meters.

On June 16 Barrios won the gold medal in the disc specialty in the athletic meeting Paavo Nurmi, celebrated Finland winning the competition with a best shot of 61.11 meters, achieved in his first attempt, while the Lithuanian Zinaida Sendriute (60.86) and also Cuban Yaimi Perez (56.98), got the silver and bronze, respectively. On July 19 at the Monaco Athletic Meeting, the tenth phase of the Diamond League, she won the silver medal with a throw of 64.24 meters.

On July 10 at the World Athletics Championships in Moscow, she qualified for the final by sending the implement up to 63.63 meters, getting the second best mark, only surpassed by the 64.16 meters of the Lithuanian Zinaida Sendriuté. The next day she reached the bronze medal this time with 64,96 meters. This was her fourth medal in World Championships.

On September 6, in the last stop of the Diamond League, held in Brussels, Belgium, was in fourth place, finishing third in the overall list of the tournament.

In December 2013, she was selected among the ten best athletes in Pinar del Río that year.