The coat of arms rests on the gold-coloured parchment rolled up in its four angles that support both sides of the tobacco, all of it remains on the beam of the republican union (in orange) tied with purple ribbons, beam that holds on top of the vermillion-coloured cold cap, insignia of republican freedom that carries in the centre a five-pointed star, emblem of the homeland.

The fact that Pinar del Río province has its coat of arms is largely due to Doctor Carlos Manuel de Céspedes, son of the Father of the Fatherland, who in 1917 was Cuban ambassador  in the United States and expressed the desire that: "...in the Hall of our future home in this capital, there appear the respective coat of arms of each one of our six provinces...".

Carlos Manuel de Céspedes y Quesada, wrote to Pinar del Río governor with the purpose of sending an official model of the coat of arms of the province, which should appear in the house that was being built for the diplomatic headquarters in Washington. 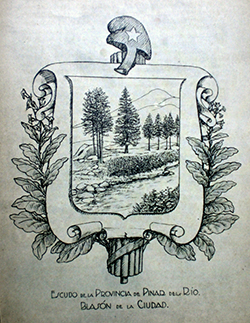 This request on the part of Céspedes was reiterated several other times since it did not receive an answer from the government of the province and the construction of the building had been stopped due to the lack of this shield and that of Matanzas. Until the Provincial Council in the session of September 19, 1917 under the presidency of José Matías de la Fuente appointed three councillors to submit for their consideration a draft shield for approval.

Councillor Andrés Rodríguez proposed a coat of arms project (which had been issued 8 years earlier) with a design by Leandro González Alcorta prior to 1906 and painted in oil by Gregorio Díaz. The latter was commissioned to paint the coat of arms again, which was ratified as an official coat of arms on September 20, 1917.

This would be the shield of Pinar del Río until October 1928, when the Provincial Council, under the presidency of Mr. Filiberto Azcuy Pérez, decided to modify it, and change it for the version of Esteban Valderrama, advised by Dr. Emeterio Santovenia y Echaide. A few changes were made to the shield, leaving it essentially the same.

The image of the Escudo Pinareño, on honorific currency is the maximum decoration that is delivered to the most distinguished people by its exceptional achivements.