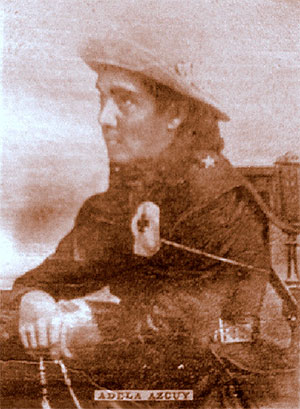 She  was born on the Ojo de Agua estate, in Viñales, Pinar del Río, on March 18, 1861. She conspired for the independence of Cuba before joining the forces of the Captain Miguel Lores, on February 10, 1896, in the area of Gramales, Pinar del Río. As she had knowledge of pharmacy, she was appointed to the Health Service.

Soon she turned from a generous nurse into another soldier in the lines of fire. This was demonstrated in 49 combats in which she took part, standing out among them: Loma del Toro ( April 1, 1896), Cacarajícara (April 30 and  May 1, 1896), Montezuelo ( September 24 & 25, 1896) and Tumbas de Estorino (September 26, 1896), all under the command of Major General Antonio Maceo in Pinar del Río province.

She excelled in the action of Loma Blanca, on October 4, 1896, as part of the combat of Ceja del Negro. On March 7, 1896 she received the rank of Sub-Lieutenant and on June 12, 1896, then Brigadier General Pedro Diaz, 1st Division Chief of 6 Corps, promoted her to Captain, rank ratified by Maceo, on December 1, 1896.

It is said that she was dressed as an amazon, armed with a machete and revolver, and touched with a wide mambí hat with a tricolor escárpela; but always accompanied by her healing briefcase.

She was a member of the Patriotic Board of Havana, founded on October 10, 1907 to oppose the annexationist current that during the second U.S. military intervention wanted Cuba to become a protectorate of the United States.

During the Republic, she did not hold public office until January 21, 1911, when she took charge of the secretariat of the Viñales Board of Education, Pinar del Río.