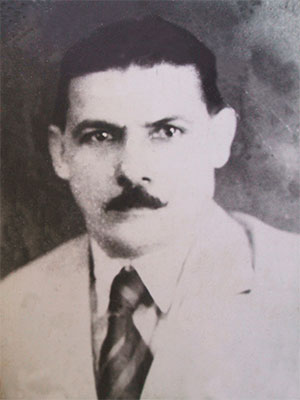 He was born on 15 January 1885, in La Palma. His family always had a revolutionary trajectory, and among his ancestors is the figure of Captain Mambisa Adela Azcuy, graduated as such by Antonio Maceo himself. In the period following the triumph of January 1, 1959, it is necessary to mention the contribution made to the cause Marina Azcuy, daughter of Liberato, who was one of the most important leaders in the province in those early years of the Revolution, especially in the organization of the Federation of Cuban Women (F.M.C).

Liberato D. Azcuy was the son of José M. Azcuy, who was Major of La Palma at the end of the War of 1895, and later Municipal Judge in the stage of the pseudo-republic. His mother was María R. Azcuy. He lived in  La Jagua district. His primary education was, from his family, given the time in which his childhood developed (last quarter of the nineteenth century). Due to his determination to improve, he graduated as a primary school teacher, along with his older brother Antonio Manuel, and practiced his profession in several schools in the area.

Already in the 1920s, he was elected Major by popular vote and suspended from office by the tyrant Gerardo Machado, due to his open opposition to the regime, in particular because he was against the Power Prorogation in 1927. This position clearly indicates his revolutionary affiliation, because in truth this continuist policy benefited him personally, but its verticality led him to become declared antimachadist.

On several occasions he was imprisoned for his ideas and the confrontation with Machado during the vortex of the Revolution of 30 shared prison with the vanguard of that generation: Roa, Pablo, Daussa, Marinello and others who permeated the revolutionary qualities of Liberato and his advanced thinking.  He was imprisoned in Isla de Pinos, when, under the pretext of his transfer to Pinar del Río, he was brutally murdered in the Artemisa barracks, by the machaditas henchmen, on May 24, 1932, in the company of his inseparable friend Manuel Iglesias.

At the fall of the dictatorship, in 1933, the main street of La Palma town was given its name, as well as the former barracks of the Guardia Rural, now the "Liberato D. Azcuy" primary school.